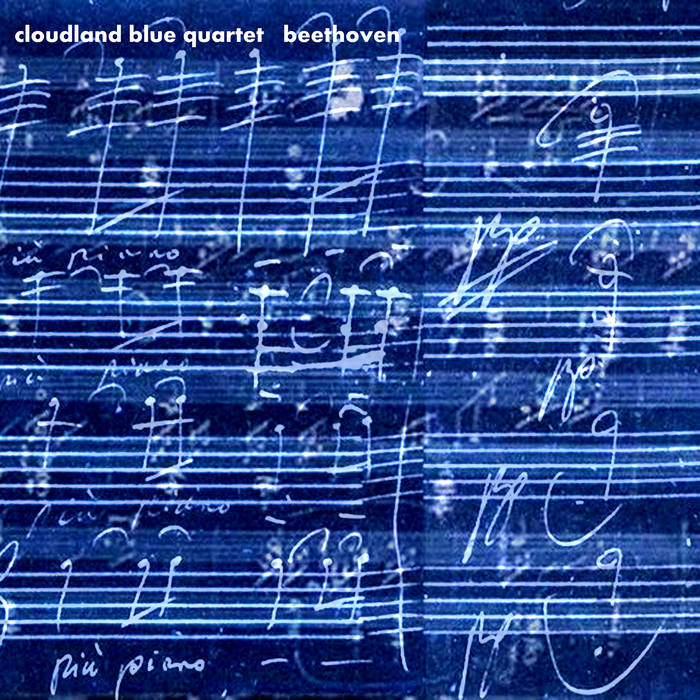 I have used Beethoven's slow music in a number of CBQ pieces and songs over the years and so, for the third, in what has unofficially become the Cloudland Bue Quartet “Composers Series”, following on from “Satie” and “Cage” earlier this year, I have turned to Ludwig van Beethoven.

In my notes for “Satie” I advised I had formulated a treatment basis for that recording, to which I would no doubt return and, for this recording, I have applied it to an edit of the slow movement, “Adagio Sostenuto”, of Beethoven's 14th piano sonata in C# minor, popularly known as “The Moonlight Sonata" – although that name was coined by a poet many years after Beethoven's death and has no connection to the composer or his original intent.

The second piece (the first to be recorded for this project) is based on the 3rd movement of Beethoven's 15th String Quartet in A minor (although it was the 13th quartet he composed), the molto adagio, entitled ”Heiliger Dankgesang eines Genesenen an die Gottheit, in der Lydischen Tonart” (“Holy song of thanksgiving by a recovered person to the deity, in the Lydian key”), which, unlike the other movements of the work, is in the key of F.

For this piece, I combined separate readings by three different string quartets and edited out the more “upbeat” sections. Once the treatment was applied, it produced a long, almost imperceptibly changing CD length drone piece.

And so, once again, short excerpts of classical music have been "re-imagined" to become CD length long-form arrangements.

Each of the main works, if downloaded rather than streamed, can be enjoyed as a seamless piece but I've also given the opportunity for listeners to "dip in" by splitting each of the "discs" into ten distinct "movements".

If this were to be available in physical form, it'd be a 3CD set - the 2CDs above plus a bonus disc, only available on download.

The extra work is based on a short passage of the 3rd movement of Beethoven's 16th String Quartet, originally treated in 1999, which piece appeared in its original form on the album "Betonmusik" by Cloudland Blue Quartet, released in April 1999 (Available on Bandcamp).

This 3rd work, which includes a long field recording recorded in Leipzig on 17 June 2019, was created after the original pieces, specifically to provide a bonus for those who choose to download the album rather than stream it.

I hope you enjoy listening to these pieces as much as I did creating them.