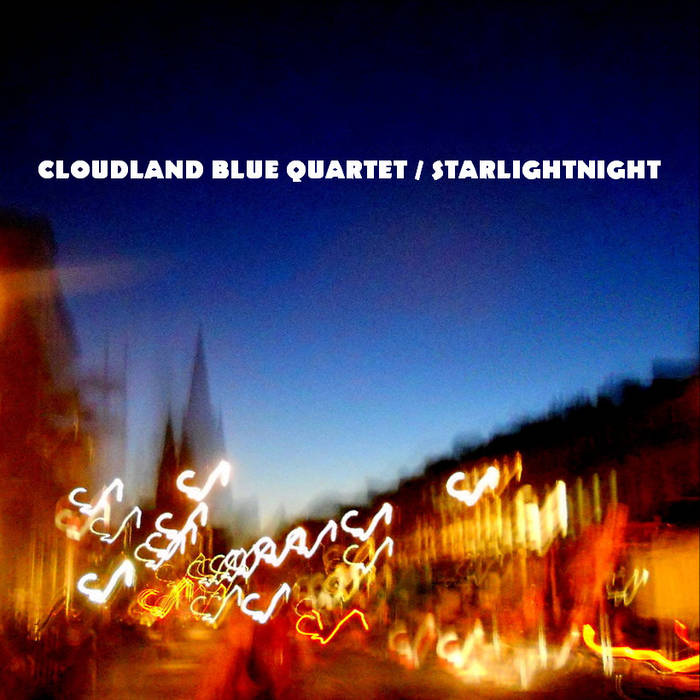 THIS ALBUM WAS ORIGINALLY STREAM ONLY

PHYSICAL COPIES OR DOWNLOADS REQUIRED A DONATION TO MACMILLAN (see below)...

David Reilly (aka CBQ) will never run a marathon - but he does create music...

The initial run of this CBQ album was only available by donating to Macmillan Cancer Support via a dedicated Just Giving page.

David's sister Pam was diagnosed with a brain tumour in November 2010 and went through some terrible times over the next year. But they had some good times too and it’s those that David will cherish...

Pam died in December 2011, when David was halfway through the writing and recording of this album. He decided to use the initial run of its release to raise funds for Macmillan, in Pam's memory...

Different packages of the album were sent to listeners, depending on their donation. What they received was entirely self funded, so, the more was donated, the more Crispycat Recordings gave too...

Everyone who donated received a link to download MP3s of the main album but none of the extra albums was available for streaming or downloading...

For donations from £10 to £19.99, supporters received the 16 song "Starlightnight" CD in a handmade gatefold sleeve...
Tracklist : The Actor Takes the Stage; Everything Will Be Alright Pt 1; Starlight Lake; Twenty Five Things; Kindling; On the Eve; Knowing This Day Would Come Did Not Prepare Me for Its Coming; Vendôme; The Ship That Sailed Pt 1; All Is Fine; Vanderhof; If I Fall; Starlight Starbright; Everything Will Be Alright Pt 2; The Actor Leaves the Stage; The Ship That Sailed Pt 2

...plus a sampler of all ten albums in the Limited Edition Box Set - including the exclusive "Missing Astronaut" remix of the opening track of the new album...
Tracklist : The Actor Takes the Stage (Missing Astronaut Mix); Human; Here in Seconds; I Believed You Said We Dreamt; Kindling; Blend; Essence pt 1; Freckles; The End of Everything; Now Let's All Have a Great Big Party

For donations of £20 to £29.99, supporters received "Starlightnight" and the sampler, together with four further albums...

"Remake", a remix and covers disc...
Tracklist : Human; All is Fine (Remix); Lights Out (Remix); Kindling (Remix); The Angels' Kiss (Remix); Need You Now; Everything Will Will Be Alright (Remix)

"Apples", a collection of CBQ songs from1997 to 2010...
Tracklist : You Haunt Me Pt 2; Thinking of Me; Going Down; Ten Twelve Seventeen; Burning Cars; This is the Time; The Phreaks Are Inside; Stranded; Blue Ice; Everything You’ve Ever Wanted; Skylines Full of Cranes; I Re-Arranged the House; Love and War; Keep Living; The Gardener; The Angels Took His Soul; Rabbits on the Verge; The Unfortunate; Tomorrow or the Day After Next; My House Could Be Your Home; I Believed You Said We Dreamt; The Foundling; I Walk to the Beat of a Cold Broken Heart; The Apple of Your Eye Pt 1

...and "Starlightlive", the alternative live performance version of “Starlightnight” along with an exclusive "recorded for live" 15 minute medley of three songs from"Starlightnight"...
Tracklist : Knowing This Day Would Come Did Not Prepare Me For Its Coming; Everything Will Be Alright pt 1; Starlight Lake; Twenty Five Things; Vendôme; Kindling; All is Fine; Vanderhof; If I Fall; Starlight Starbright; Everything Will Be Alright pt 2; The Ship That Sailed pt 1 (edit); Medley : Vendôme/Vanderhof/Starlight Starbright

For donations of £30 to £39.99, supporters received "Starlightnight" plus a 10CD Box Set containing the sampler, the four albums above, plus a further five albums...

"Canon", a live acoustic anthology of songs from all nine CBQ song-based albums...
Tracklist : Thinking of Me; Blend; All Is Fine; We Drove; Lovedrunk; Splinterheart; Never or Now; You Taught Me How to Love You; Starting to Worry; A Nice Job in a Small Town; This Is All There Is pt 1; Very Small; Skylines Full of Cranes; The Crocodile Song; If I Fall; The End of Everything; Twenty Twenty Vision; I Re-Arranged the House

"Walkout", a proposed but never played CBQ acoustic live set of originals and covers from September 2011...
Tracklist : The Apple of Your Eye pt 2; Lights Out; Human; The Angels’ Kiss; Thinking of Me; Blend; The First Time Ever I Saw Your Face; Twenty Twenty Vision; The End of Everything; February; The Crocodile Song

...and "Nightlightstar", which contains of each of the 16 songs from “Starlightnight” in their early demo formats...
Tracklist : Now Let’s All Have a Great Big Party; Too Good To Be True pt 1; Tabor Lake; McBride; Kindling; Swing Jazzy; Erster Verlust; Vendôme; Lohengrin pt 1; All Is Fine; Van der Hoof; If I Fall; Starlight; Too Good To Be True pt 2; Now We Can Live Together For All Time; Lohengrin pt 2

And, finally, for donations of £40 or over, supporters received "Starlightnight", the 10CD Box Set...

No money came to us for the album, we covered all production, postage and packaging costs ourselves...

That - and the fact that David had spent nearly two years writing and recording - was our contribution – so it was indeed a little bit like running a marathon...

Thank you to everyone who dug deep and donated...

On the Eve Synthesiser, Drum Loop

Knowing This Day Would Come Did Not Prepare Me For Its Coming Slow Vocal, Samples, Environment, Treatments