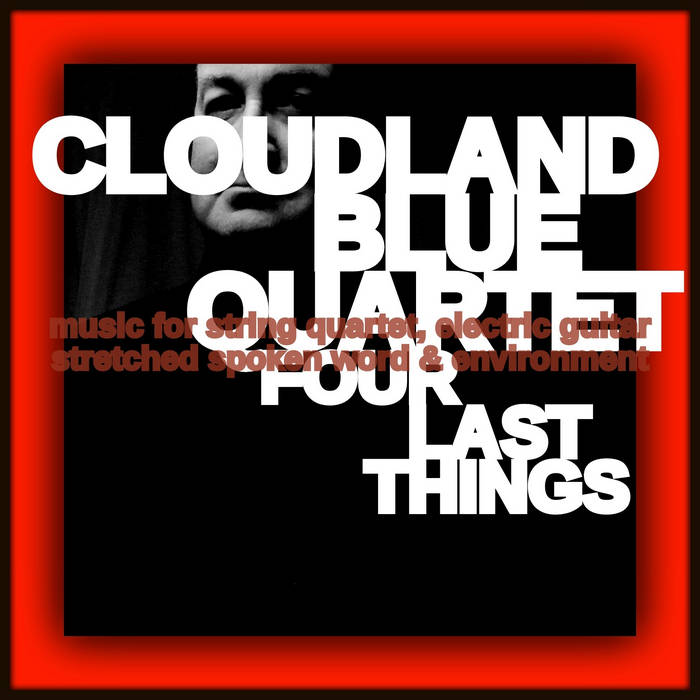 This album is designed as a three hour, four disc set, available to stream or download (the download contains a further sixteen discs of elements, alternatives and extras, the fifteen pieces of cover artwork and a collage of the fifteen covers).

The original intention was to release each of the four source albums separately. Now each is available as one of the sixteen bonus discs in the download version of "Four Last Things".

The first project, "SS SQ XIX" (tracks 4, 9, 14 & 20), was recorded as part of an exercise instigated by writer Sid Smith to sonically illustrate twenty quartets of photographs which he dubbed "string quartets". Cloudland Blue Quartet was chosen to create the soundtrack for set XIX in January 2014.

The second project (tracks 1, 6, 7, 11, 12, 16 &17) features recordings of the environment around the Crispycat Studio on the morning and evening of 3 March 2014. Only the morning recording was used on the main album but the evening recording is available too as one of the bonus discs.

Third (tracks 3, 5, 10, 15, 19 & 21) is a set of guitar soundscapes which was to be released as the album "Schneewittchen". Each piece has a title which references the Brothers Grimm fairytale "Snow White". These were recorded in March 2015.

The last of the projects is a string quartet (tracks 2, 8, 13 & 18) created by Cloudland Blue Quartet using the Infinite String Quartet, an online programme containing fragments of music lasting from a few seconds to around a minute and available to create original works. The four movements were created in early August 2015.

In late August, the four projects were brought together to form the basis of what is presented here.

Editing and mixing took place until the end of 2015. By March 2016, after much listening and consideration of possible further work, it was decided the album was "finished" and should, at last, be released.

The download version comes with the following bonus material, which takes the total track count to 108.

Disc ten (tracks 46 & 47) comprises the finished version of the first movement of "Four Last Things" with additional drums. This was also created in late August 2015,

Discs twelve and thirteen (tracks 51-81) contain a fifth, unused project which, by way of Musique Concrète, documents the first 31 days of 2015.

Disc seventeen (tracks 85-89) contains the first of two EPs released in the Autumn of 2015, "The Leonard Cohen EP" (with two added soundscapes).

Finally, disc twenty has the final piece of the project (track 108) a rough acoustic demo in mono, the only existing recording of the last Cloudland Blue Song to date, "Here Again", recorded 27 July 2014.

In all then, we present over twelve and a half hours of Cloudland Blue Quartet recordings for download.

The Four Last Things Are:-
I. Stretched Spoken word (SS SQ XIX) recorded, stretched and treated by David Reilly, 12 January 2014, with thanks to Sid Smith